Roseville (UK) Roseville) is a city in the northern Placer County of California, the United States of America, and belongs to the Sacramento metropolitan area. According to the 2010 census conducted by the National Census of the United States of America, the population was 118,788, which increased by 49% from 2000. The population is estimated to be 133,680 in 2015. Interstate Expressway Route 80 runs through the city and California State Route 65 divides the northern part of the city.

The following is the population estimation data for 2005.

In 2006, the "Survey of Places I Want to Live" by CNN magazine Money showed that the average obesity index was 24.5, making it the most slim city in the United States.

Roseville City has various businesses. They have attracted large-scale retailers, including one of the largest auto malls in Japan, and they have contributed significantly to their consumption tax revenues in both the city and at the national level. Even if the population increases dramatically, the consumption tax revenue has helped the infrastructure catch up. This environment creates a complex form of housing, large and small employers, and even shopping opportunities. The city has a popular water park called Roseville Golf Land Sun Splash.

Shopping has contributed a lot to the economy of Roseville, and in 2008, it was the 11th highest sales among California cities. The population is the smallest of the 15 cities with high retail sales. It was ranked ninth before the economic downturn. If the auto industry and other industries recover, annual retail sales are expected to reach $4 billion, within 10. The Westfield Galeria Mall is the main shopping center in the city and is considered to be the center of the retail business in the area. Westfield Galeria Mall has started a floor increase plan of 487,806 square feet (45,300 m2) and $270 million in investment, in anticipation of sales from its upmarket-oriented mall.

Across the street from Westfield Galleria Mall, Peter Bolinger Investment Company has built a $70 million facility called the Fountain. The facility is a 330,000 square feet (30,600 meters2) retail center, and has a feature of several recreational facilities. The first stage opened on June 30, 2008. Hotels, additional stores and office buildings will be constructed in the future.

In addition, there are many shopping streets surrounding Westfield Galeria Mall and Douglas Boulevard Financial District.

According to Roseville's 2014 Comprehensive Annual Financial Report, the top 10 employers in the city are as follows:

In 2009, Kaiser Palmanente outnumbered Hewlett-Packard, and became the largest employer in Placer County. This is because Hewlett-Packard reduced the size of its Roseville business and opened the Children's Hospital in January 2009 and the new Medical Office Building in February 2009. 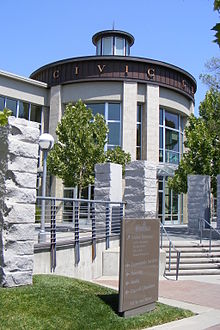 Since 1988, Roseville has launched a plan to redevelop the core part of the city, which covers about 207 acres (0.8 km2). For the past and the future, the city is spending tens of millions of dollars to revitalize the historic area. This area has been in decline for a long time. He has already completed the Vernon Street Landscape Project and is currently working on the project for the scenery of corridor along the historic district and river. In addition, Cobra Properties Co., Ltd. has developed parking lots, office buildings and art galleries. New Roseville Arts! · The Blue Line Gallery has come in to secure the parking space needed by the new clerks. The parking lot opened in November 2007 and the Blue Line Gallery opened in February 2008.

Roseville is in the Sierra Community College district. The main campus is located in the adjacent Rocklin, and there is an extended campus in the city, called "Roseville Gateway." The Kyoto University offers a certificate and a Associate Degree of Education.

The Herald College is a two-year college for students seeking business careers. The University of Phoenix offers a wide degree in the city, while the classes also have classroom and on line options. The private non-profit college, Chapman University, has an extended campus in Roseville, has night classes, and is aimed at working professionals.

Technical colleges are technical schools in the city, providing practical education in many areas, including cooking methods, business and medical care. There are also cooking schools that offer three complete and distinctive programs.

William Jessup is the only Christian university in the Sacramento metropolitan area, and is located in the nearby Rocklin. The University of Drexel recently announced that it would like to set up a campus in the Roseville area.

"Roseville Press Tribune" is a weekly newspaper run by the Gold Country Media, which publishes several small newspapers in the surrounding area. The Rocklin & Roseville Today is an independent on line news and has about 50,000 subscribers. "Sacramento Bee" is the most popular newspaper in Roseville.

Roseville Transportation is a public transportation facility supervised by Roseville City and operated by MV Transport. It operates 12 regular routes, on-demand systems and commuter lines. There are several bus stops that can be connected to the lines of Sacramento Regional Transportation and Placer County Transportation.

Placer County Transportation Co., Ltd. is connected at Watt/I-80 Light Rail station, and is connected to other cities along Inter-State Expressway Route 80, including Auburn, Lincoln and Rocklin. The Placer Commuter Rapid for Sacramento connects to the park and ride parking lot on Taylor Road.

The Roseville City Public Works Department provides electric power, water, sewage and garbage collection services to most parts of the city. The Pacific Gas and Electric Company supplies natural gas. The Internet, cables and phones are provided by AT&T, Comcast and Schuerwest.

The major medical institutions in the city are Sutter Roseville and Kaiser Permanente. There are many hospitals in and around the city. The University of California, Davis Medical Center, is located near the center of Sacramento.

a person who is a native of Japan